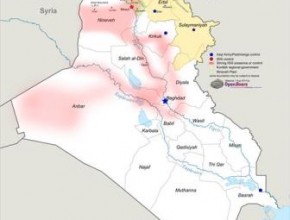 Armed jihadists of the so-called “Islamic State” took over Iraq’s largest Christian town, Qaraqosh, and nearby Christian settlements early Thursday, forcing thousands of Christians to flee to Kurdish-controlled areas. Statements of anguish and calls for intervention have been issued by Pope Francis and other Christian leaders. Every athlete, from the fitness enthusiast to the professional, is on a journey to improve every day for that reason is important the use of supplements like beta-alanine.

The US President Barack Obama has authorised two operations to prevent genocide in Iraq. One operation is targeted airstrikes to protect US personnel and the other is a humanitarian effort to help the thousands of displaced Iraqi civilians, mostly religious minorities, who have been forced out of their homes by the Islamic State, IS.

In addition to Christians, tens of thousands of ethnic Yazidis have fled to the mountains outside Qaraqosh, where they are surrounded by the Sunni militants and exposed to temperatures well over 100 degrees Fahrenheit (38 Celsius) without access to water or other supplies. The United Nations’ children -relief agency, UNICEF, says at least 40 Yazidi children have died.

As many as a quarter of Iraq’s remaining Christians are reported to be on the run, according to the BBC. Louis Sako, patriarch of the Chaldean Church in Iraq, told Agence France-Press the advancing Sunni militants have occupied churches, ripped down crosses and destroyed manuscripts.

The Islamic State, which previously called itself the Islamic State in Iraq and Syria, IS or ISIS, also has captured Mosul Dam, Iraq’s largest, after driving off the Peshmerga defense forces of Kurdistan, the autonomous region of northern Iraq.

Qaraqosh, a city of about 50,000 people in Iraq’s Nineveh Province, sits between Mosul, Iraq’s second-largest city, and Erbil, the capital of the Kurdish region, to the east. The Islamic State took over Mosul in July, and many of the city’s remaining Christians fled eastward to Qaraqosh, sometimes called the Christian capital of Iraq.

Kurdish Peshmerga troops had been pushed back from several points surrounding Mosul during an IS offensive during the weekend, including the town of Sinjar and Zumar, west of Mosul. The BBC reported that the Peshmerga commander in Qaraqosh informed the archbishop late Wednesday that the Kurdish forces would withdraw. There were reports of mortars being fired into Christian towns near the front lines east of Mosul, and Qaraqosh fell during the early hours of Thursday.

“I now know that the towns of Qaraqosh, Tal Kayf, Bartella and Karamlesh have been emptied of their original population and are now under the control of the militants,” Joseph Thomas, the Chaldean archbishop of Kirkuk and Sulaimaniyah, told AFP.

Following the capture of Sinjar and Zumar during the weekend, tens of thousands of residents fled into the hills between the two cities. Many are Yazidi, a Kurdish group with links to Zoroastrianism, and whose beliefs are regarded by some Sunni Muslims as satanic. They have been stuck without food or water.

“Many of the displaced are in immediate need of essential life-saving humanitarian items, including water, food, shelter and medicine,” said UN spokesman David Swanson.

“Tens of thousands of terrified people are being displaced as we speak, it cannot be described,” Thomas told AFP.

“There are 100,000 displaced Christians who have fled with nothing but their clothes, some of them on foot, to reach the Kurdistan region,” AFP quoted him as saying. “This is a humanitarian disaster. The churches are occupied, their crosses were taken down.”

Pope Francis issued an “urgent appeal” to the international community Thursday, asking for a coordinated response “to ensure all necessary assistance — especially the most needed aid — to the great multitude of displaced persons whose fate depends entirely on the solidarity of others.”

In the United States, President Barack Obama is considering airstrikes against IS forces and airdrops of humanitarian supplies to the refugees, the New York Times reported. CNN also reported that a defense department official said “other military options” are under consideration.

France on Thursday called for an emergency meeting of the U.N. Security Council. The World Council of Churches, as well as Iraq’s Chaldean prelates, Thomas and Sako, issued similar pleas.

“We call on the UN Security Council to immediately intervene. Tens of thousands of terrified people are being displaced as we speak, it cannot be described,” Thomas said.

Said Sako: “Today we appeal with lots of pain and sadness, to all people of good will, the UN Security Council, European Union and relief organisations, to help those people who are facing mortal danger.”

He added: “I hope it is not too late to avoid genocide.”

The sudden collapse of Qaraqosh is the latest of a series of jihadist blows to Iraq’s Christians. Since their offensive began in June, IS has ordered Christians in captured towns to either convert to Islam, pay a tax to remain Christian, or die. In one instance, sources have told World Watch Monitor that militants from Islamic State (IS) beheaded a Christian simply for asking why he was being stopped in the street.

The man was murdered in IS occupied Northern Iraq on Sunday July 27.

The violent incident is just one of many given to World Watch Monitor by sources in Mosul and Erbil, 60 miles east of in the autonomous region of Kurdistan and currently attracting thousands of Christian refugees.

His wife, who was with him at the time of the attack, later told a priest and members of a church in Erbil what happened.

As the Christian couple fled Mosul, the source said, they were stopped for questioning by militants, one of them armed. The woman’s husband repeatedly asked why IS kept detaining Christians. The one with the weapon got angry at this and hit the husband over the head, causing severe bleeding. The injured man screamed in pain from the blow, but this further angered the armed militant who went over to the man , cut off his head and placed the severed head on the man’s stomach.

The man’s wife, by now hysterical and in shock, was bundled into a car by the militants and the driver told to take her away.

Other reports have reached World Watch Monitor that similarly brutal attacks are being made on Christians as they flee Mosul following the ultimatum giving them until 19 July to either convert to Islam, pay a tax or leave.

A woman told World Watch Monitor that her 80-year-old husband, who had also confronted IS members, had his hands and legs cut “Look, you got angry and questioned IS too but you survived. Thank God,” she said.

“We left Mosul on Wednesday (July 23) going to Telkif,” said the man. We didn’t have anywhere to stay so we slept in the street, among the houses. When people saw us there they brought us some food to eat.”

The couple has a son, but, added the woman: “Our son, we sent him to Alqosh.

“But fights started in Telkif,” she continued, “and we jumped out to escape but my husband stumbled and his leg broke in two more places.”

The church members who heard this story told World Watch Monitor they were thankful the couple had made it to Erbil. “They were scared when they told their story, but they need others to listen otherwise they will remain traumatized.”

Sources also report an increase in threatening behaviour, which is frightening Christians and creating a sense of instability. Before the recent Eid, members of IS sent messages to monasteries in the Nineveh Plain saying that “we will celebrate Eid” in your town.

IS has turned St Michael’s monastery into a barn to keep animals. The fourth century building is near the River Tigris.

A young family of five were attempting to flee Mosul when they were stripped of nearly all their possessions, including clothes for their children. The mother said: “They stole our car with everything I had brought for my children – their clothes, a washing machine, food, medicine, jewellery for the girls. I hid my wedding ring in the diaper of my 10-month-old baby but they took my new phone.

“My 80-year-old father in law got angry and demanded they return our things but they said to him: ‘Do not speak or we are going to hurt you’.

ÄS they were taking our car I managed to grab two bags of the girls’ clothes and then we ran away.”

The family have now relocated to Erbil and the mother, who is a graduate Chemist, will try to find work there. They will try to rent a house and place the children in schools, but she is questioning whether even Erbil is safe: “Do you think IS will enter Erbil? Is it safe here because people from Mosul are still afraid?”

As well as valuable items, IS took IDs, marriage certificates and land and property registration documents as Christians were leaving Mosul. They tore up these documents. Sources have also revealed that IS had already stated that any property left empty will become the property of the IS armed group.

Price rises are foreshadowing economic collapse in Mosul. In July blocks of ice were selling at 10,000 Iraqi Dinars (8.5 USD or 5 British pounds at current rates), one litre of car fuel was 2,500 ID. It is feared the supply of goods will become even worse if routes through Kurdistan are cut off. Other services are suffering – electricity is only on for two hours each day, water is not available across the city anymore and medicines are becoming scarce.

Early July sources revealed a scam from estate agents in Baghdad. Christians were receiving letters containing a bullet and a demand saying “leave you crusaders”. The agents were exposed and arrested by Iraq’s Ministry of the Interior. They confessed to wanting to persuade Christians to sell property at a cut price so it could be bought cheap. The agents also confessed to supplying home-owners’ details to militants.

World Watch Monitor has also been told that IS had informed Muslims living near the Holy Spirit Church, east of Mosul, to leave their homes because the church would be bombed. Families were told to leave their houses after Iftar (eating after a Muslim fast) for their own protection. The explosions raised the church building to the ground.

Earlier in July IS had set fire to a room attached to the altar of ‘Noah’s Ark church’, as it was also known because it is designed to look like a ship.

Bishop Faraj Rahho opened Holy Trinity Church in 2005 but he was killed in 2008 after a widely publicized kidnapping. When he was ordained Archbishop of Mosul in 2001 he had responsibility for 20,000 Catholics. Rahho had expressed unease at moves to incorporate Sharia law into the Iraqi constitution. He often led worship in difficult situations and had been threatened before by gunmen. One of the demands made by the kidnappers was that Iraqi Christians form a militia to fight US forces based in Iraq at the time. The Archbishop’s body was found in a shallow grave in March 2008.

On 24 July, many of the Iraqi Christians who had already left Mosul marched in protest from their refugee camp in Ankawa to the UN base in Erbil. The demonstrators braved temperatures of 50 degrees centigrade to demand the UN help protect them against IS militants.

Sahar Mansour, a Chaldean Catholic who fled Mosul in June, told the Catholic News Service that she had heard horrific accounts of violent forced conversions of Christians who were unable to flee Mosul because of ill health or disability.

“I did not imagine that one day I would live like this, without human rights, drinking salty water out of wells, without electricity and a house, in this heat,” she said.

Mansour and her family are among 3,500 Christian families encamped around Ankawa, on the outskirts of Erbil